One of a pair of neighbouring bungalows, this is now the permanent home of a couple who decided to settle in the the lap of the Matheran range. 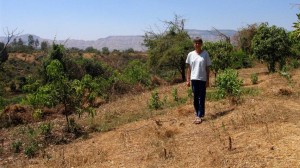 The site has a fairly steep slope as you can see. Notice also the Gar­bat plateau and Matheran in the background.

The plot slopes quite steeply towards the river Pej, so full advantage was taken of this fact to have a partial basement on the lower side. This basement has three “rooms” – one of which is for tanks to store harvested rainwater for drinking and cooking. Although the Pej is perennial, it does have high levels of urea especially during the monsoon months.

There were some mango trees where the house was to be built, so the location was modified a bit to avoid cutting them. A few bushes, some of them thorny, did perish though. The clients are experts on indigenous trees and have landscaped the surroundings of the house themselves. 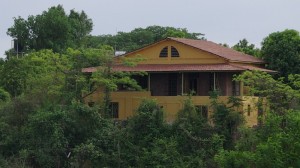 Seen here from across the river, the veran­dah is a great place to lounge. Equally impor­tantly, it acts as a bar­rier to direct heat-gain.

Being a relatively rocky area, Karjat is a very warm place during the day almost throughout the year. Nights are usually pleasant but when the sun is out, one most definitely wants to retreat indoors. So, while one wants to maximise ventilation, one also wants to avoid solar heat gain. High-level ventilation therefore was provided on the windward and leeward sides of the house as a result of which, there is a constant circulation of fresh air and any heat is immediately expelled. 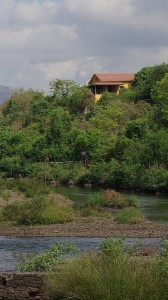 Viewed from the river, the house nestles between tall trees -- most of them older than the house itself

Sun studies were conducted to check for the penetration of sunlight – especially during the summer months of April and May. The wind at this location usually comes from the South, over the river, bringing with it a relatively cool breeze.

The design criteria was fairly straightforward — a home that was ecologically sound, easy to clean and with maximum view of the surrounding mountains. Energy usage was to be kept to a minimum because the area is chronically short of electricity and rain-water was to be harvested for drinking purposes.

The clients wanted a very simple layout with a single bedroom, a study, a meditation room and an open plan kitchen. All around we planned a deep verandah for sitting out and, equally importantly, shading the house from the extreme heat of the Karjat afternoons. 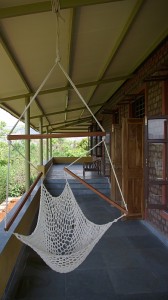 The deep verandah is an additional living space and protects the southern side of the house from heat. As the flyash-brick walls of the right are pro­tected from direct rain, they have been left unplastered

There are very few locally available materials in this region with the primary exception of black basalt. This was used for the foundation work and for constructing the plinth walls. The superstructure, being load-bearing, was to be of bricks but the clients wanted to avoid terracotta bricks because of the degradation of top-soil and the usage of wood fuel for making it. Instead, they opted to make a statement by calling for fly-ash bricks from a plant in Wada – Thane district.

We wanted to avoid plastering the bricks except where they would be directly exposed to the elements. However, standard fly-ash bricks look extremely dreary. Therefore, we asked the manufacturers to add red-oxide pigment to the mixture during production which resulted in bricks that had a wonderful pale terracotta colour to them. The grout, too, was of a reddish-brown colour to compliment these bricks.

Before you shoot me a email asking me for the name and address of the supplier, I would like to say that the last lot of bricks were quite terrible and despite promises from the manufacturer, we got no replacements. It was most disappointing and I will not recommend him to anybody! 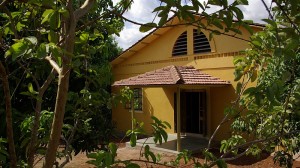 Entrance to the house.

The use of RCC has been kept to a minimum with only the slab of the verandah and a single ring-beam at the base of the roof. The brick walls take the load exceedingly well and the roof is a light-weight steel pipe structure with “Eco-Board” panels topped by Mangalore Roof tiles. 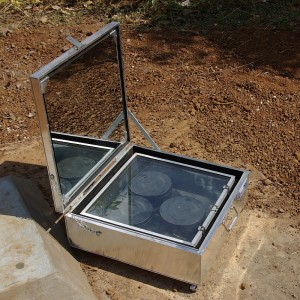 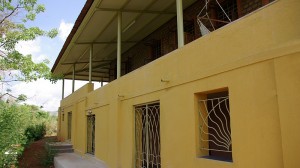 As the site had a steep slope, we used it to our advantage to create a half-basement below the verandah. The spaces created here house the rani-water harvesting tanks, a motorcycle and garden implements. 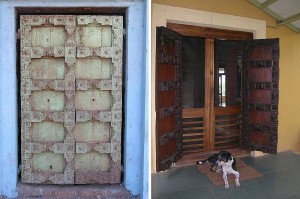 To the left is the front door as it looked before it was stripped of years of paint. The shutters have been hung inside-out so that the intricate design is visible with the doors open -- which they are throughout the day.