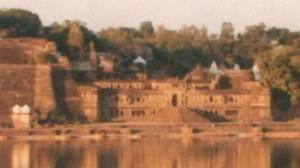 Maheshwar’s sandstone ghats seen from across the Narmada river

On the North bank of the River Narmada, in the central Indian state of Madhya Pradesh is the town of Maheshwar, old capital of the Holkar kingdom. Mentioned in both, the Ramayana and Mahabharatha, it rose to prominence during the peaceful reign of Maharani Ahiliyabai Holkar in the 18th century.

The fort which houses the palace and other important community buildings, opens out on to what are, arguably, the most beautiful sandstone ghats in the whole country. 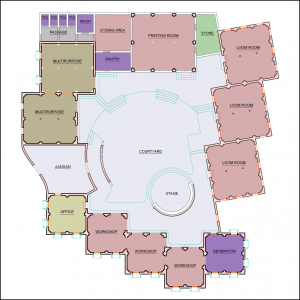 This place is home to the famous Maheshwari handloom sarees with their distinctive designs and silk/cotton blend. The Kaya Kalp project was commissioned by Rehwa Society, a highly successful co-operative that markets local products at exhibitions throughout the country.

When Rehwa Society began with a single weaver about two decades ago, there were a handful of looms in the entire town. Today, close to a thousand of them operate in and around Maheshwar. Kaya Kalp was the brainchild of Sally and Richard Holkar who felt it was time to repeat the Rehwa success story in other weaving communities in Madhya Pradesh, where the local skills are being lost due to lack of exposure. 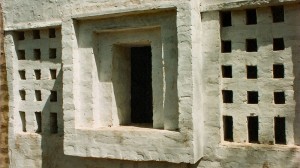 Detail of window and brick jali

Careful attention has been paid to the materials used in construction. The consumption of environmentally expensive materials was minimised. With no wasteful reinforced cement concrete anywhere in the building. The load-bearing structure is built from locally made burnt brick, set in a mixed lime/cement mortar. There was minimal plastering of the external walls and certainly none on the inside.

The roof framework has steel trusses covered by corrugated galvanised iron sheets  which are, in turn, clad with interlocking half-round terracotta country tiles. Together they create an insulating air-gap that keeps the rooms cool, even in the 46° Celsius (115° Fahrenheit) summers. The combination also prevents even the slightest leakage, which could easily ruin many days of work as it lies stretched out on a loom.

Steel trusses below the iron roofing sheets are very durable and can easily be reused or recycled at the end of the building’s life span. I am happy to say that, though the Maheshwari people were initially sceptical about the efficacy of this system, it has now become their “industry standard”. 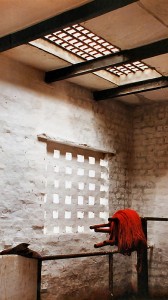 The dyeing area where the yarns get their colour

Kaya Kalp covers a total area of 7500 square feet (~ 700 m²) and has been built (in the mid-1990s) at a cost of just Rs. 105 per square foot. These figures surprised everybody because no inferior materials or processes were used. It must be mentioned though, that local labour is very cheap and contributed greatly to lowering of the overall cost. On the other hand, other similar projects in Maheshwar at the time had cost up to three times as much.

I would like to take this opportunity to thank Poonamchand (affectionately known throughout Maheshwar, simply as “Ba”). He was among the last of a dying breed of master-builders and a repository of knowledge on local construction methods. Without the knowledge and experience of this young septuagenarian, Kaya Kalp may never have turned out as it was intended. I would also like to acknowledge the valuable input given by Architect Sanjay Prakash at the initial stages.