For most projects, I not only design, but also execute the work. For this one, though, because of distance, I only did the former.

The clients, manufacturers of packaging material in Cuttack, Orissa, wanted to construct a factory that was not just functional but, to the greatest extent possible, a green building in all respects. The product they make is hardly environmentally friendly, so it was somewhat ironic, but they had a genuine desire to make a change for the better so I agreed to take the assignment. 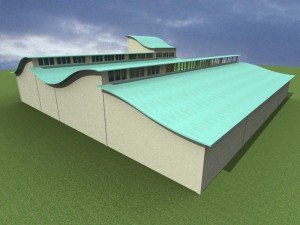 Initially, the structure was to be of a single story only so, had that remained the case, the factory might just have looked like a variation on a theme with north-light roof trusses and curved metal roofs instead of straight ones.

Instead, and as luck would have it, the clients decided that they needed at least one additional floor to house the lighter machinery. Land in this area–alongside the Mahanadi river–is expensive and it would do them no good to scatter multiple structures all over the 2 acre plot. That posed a problem for the design as the clerestory windows would be of no use to the lower floor — either for light or ventilation. 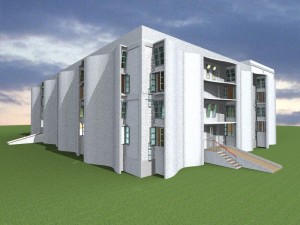 North West corner of the factory. This was the final design based on which the factory was actually built. You will notice that windows facing North are twice as large as those pointing West.

So, to allow for the clerestory windows to be used by both floors, I thought to turn them sideways. Back at the drawing board, I realised that only allowing windows on the North and East would mean the interiors of the factory would be dark for much of the day — not to mention that natural ventilation would be nil. On the other hand, too much light from the South or West was not desirable and neither was a draft that could carry in dust particles.

So I reverted to an undulating form–a double wave form in fact–that not only softens the factory outline but also works better for ventilation. Here the smaller waves face the South and West and the bigger ones face the North and East. 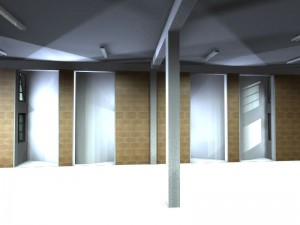 Now, when light enters, it reflects off the inner side of the baffle walls. Any heat that is generated remains in the immediate vicinity of the windows. Additionally, the upper of the two windows is bottom-hung to allow hot air to easily escape.

Between successive waves in the baffle walls, horizontal awnings protect the more conventional windows from the sun during the hottest times of the day.  In fact, sun-studies were carried out to ensure that the sun’s rays almost never directly reach the building’s interiors between 10:00am & 3:00pm. 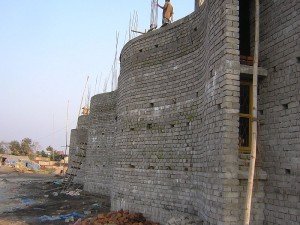 A view of the factory under construction shows the flyash bricks used for the walls.

Being a large structure which needs to take heavy loading, the framework and slabs had necessarily to be in RCC — a material that I avoid using when it is not required.

All the walls, including those of the baffles were from flyash brick and plastered only where necessary. Initially, we wanted to use the local laterite but that worked out much too expensive.

Some more photos of the construction