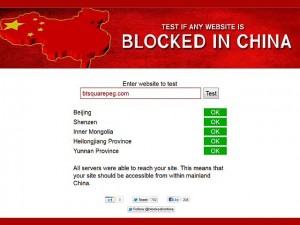 Not blocked in China. And won't be unless they decide to have something against sustainability.

Reading an article on censorship in China, I came across a website that tests if any site is blocked in the land of the dragon.  Google, Twitter and a whole host of other popular sites that we take for granted are inaccessible to the average Chinese citizen who might not know how to use proxy servers.

Just for fun, I tried btsquarepeg.com and, not unexpectedly, got the all-clear.  The server tests whether a website is accessible in five different regions and I wonder if there are any sites that are blocked selectively.

I disapprove of what you say, but I will defend to the death your right to say it.
– Voltaire

Meanwhile, our telecom minister has said that India won’t ever block social media while also saying that companies like Google or Facebook have to remove offensive content or be liable for prosecution.  That’s tough. A halfway house is never easy to implement.  I completely support the removal of universally unacceptable things like child pornography but most content companies do that in any case so what our government is talking about is the usual “hurting religious sentiment”.  Our people have become notoriously thin-skinned over the last couple of decades and we really need to re-learn how to laugh at ourselves.