I’ve said it before and I’ll say it again: urban dwellers have an obsession with paving every possible open space.

Housing society compound?
Pave it — we need to park our cars!

Open area where social interactions take place?
Pave it — our clothes get muddy!

Barely-used internal road?
Pave it — we get stuck in the monsoon and it’s hell on the tyres!

If we Must Pave, Let it be Permeable

Some of this paving may well be justified but, because it is done indiscriminately, it leads to a boatload of problems related to the water table, the health of the city’s trees and even the heat we’re subjected to. I’ve written all this in greater detail elsewhere on this site but this particular post is about a type of product that could help in such situations.

In late 2015, there was a buzz in the construction world as Lafarge UK showcased a super-porous asphalt that could guzzle an incredible 4000 litres of water in about a minute. Media started calling it “thirsty concrete” and truly, if you watch the video below, it does look like the water is vanishing into desert sands.

I have never been a great fan of the wasteful use of concrete but, when it is required, the least we can do as architects is to try and use it correctly.  Unfortunately, at least as far as I can tell, this product and others like it are not readily available in India. In fact the only case I know of permeable concrete being used, is for a parking lot at Jaipur railway station.

Unless architects and engineers specify such products and create a market for them, there is no way that companies will manufacture them here. I do hope some of my brethren in the industry take up the call.

In our urban environment we see numerous examples of open spaces with hard paving all over them. One of the reasons for this is our insatiable hunger for parking. The earth in our cities is starved of air and water — sacrificed at the altar of our rubber-shod tin cans.

Of course, if our city fathers were more enlightened and aimed for better public transportation instead of caving in to the cult of the car, we wouldn’t have reached this impasse in the first place. However, this page is not a rant about ineffective urban planning but about the effects of indiscriminate paving and what we can do about it.

When we pave over open spaces, a number of things happen.

This one is pretty obvious and hardly needs an explanation. If the ground is paved, there is no way that any more than a tiny fraction of rainwater will ever reach the soil. In Bombay, there was a time when one could dig a well and hit water not far below the surface. These days, the only reliable wells are the ones that adjoin large green spaces — like the maidans for example.

Other cities are not so lucky and those who live where borewells are common will tell you that the wells need to be dug deeper every year. The water they reach is also an increasingly fickle seam. The demand on the groundwater is constantly on the rise but all that paving never allows it to get recharged. 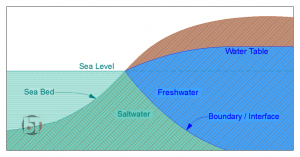 Freshwater is lighter than saline water

Saltwater is denser than freshwater and forces its way inland below the latter. If the (fresh) water table drops, the boundary between them is pushed deeper inland. Salinity in the soil is not merely bad for plant life but also for construction.

Trees Find it Difficult to Survive

For plants — and especially trees — paving is doubly detrimental. Not only is there very little water in the soil to help them grow but their roots are also unable to breathe. As a result, the trees develop a weak rooting system; it is no wonder so many of them topple over during the monsoons. That many of the avenue trees in our cities are fast-growing exotics, doesn’t help very much either. 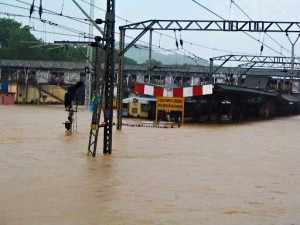 When it rains in an urban area that is excessively paved, the runoff has to go somewhere! That somewhere, is the storm-water system which is frequently unable to cope. This leads to the all-too-familiar floods we see every year.

At best, flooding is an inconvenience but, as the last few years have shown us, it can also be deadly. Corrupt builders, politicians, and bureaucrats are responsible for the rampant encroachment on natural drainage channels in many of our cities. This results in the kind of devastation and loss of life we saw in Bombay (2005), and Madras (2015).

No doubt, in both cases there had been uncommonly heavy rainfall. We must remember, however, that climate change is causing an increased frequency of such extreme events, so it would be foolish to brush them aside as a freak events. 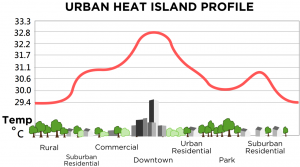 Paving is one of the major factors leading to the heat island effect — that phenomenon where an urban area is significantly hotter than its surroundings.

Unlike soil which cools off rapidly when the sun goes down, paving retains heat for longer and then emits it slowly through the night. One of the only ways to reduce this effect is to increase the area under plantation (including on roof terraces). However, as we have seen earlier, that is rather hard to do, when everything has been paved over. It’s a bit of a vicious cycle.

What We Need to do

Of course the very best thing to do is to avoid paving as far as possible. However, there are many situations when we really have no choice. At such times, the least we can do is to use materials and systems to mitigate the problems we cause. 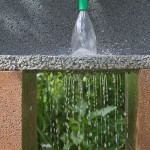 This is a type of concrete where the fine aggregate (sand) is missing so that the concrete becomes porous enough for water to percolate through. This means, of course, that it is not as solid as other concretes and cannot sustain the same heavy-duty usage. On the other hand, it is perfectly usable in areas where traffic density is low or, for example, in parking lots.

Some cities like Portland, Oregon in the USA have experimented quite extensively with permeable paving. Unfortunately, there is little sign of anything even remotely close being done here. 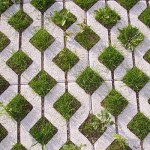 These are easily available here but not as commonly used as I wish they were. They are easy to lay and, to my eye, they make a space look much nicer than if were completely covered with a hard surface.

Permeability is excellent but, like porous concrete, it can only be used for low-traffic areas or parking lots. 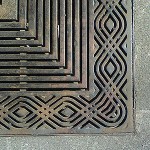 If all else fails — and even if not, it is wise to have tree guards which allow the soil around the roots to breathe. This is something that is conspicuously lacking in our cities.Instead, we see a low brick wall made as close to the trunk as possible. Apart from being undersized and ugly, these are also tripping hazards for pedestrians.

It would be so simple, instead, to embed a cast iron tree guard that is level with the pavement. If the city authorities feel that the iron will be pilfered, they can do something similar in ferro-crete. It won’t look half as nice but at least it will be effective. 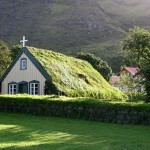 While a green roof can’t do very much for the surface runoff and the storm-water systems, it can certainly be help reduce the urban heat island effect.

Planted roofs haven’t caught on too well here as yet. That will not change until waterproofing systems become much more reliable. People who have running battles with monsoon leakage are unlikely to tempt fate.

The situation is far from ideal but it isn’t a lost cause just yet. Given enough awareness and pressure from the general public, things can improve. Organisations like depave, for example, have done this very effectively. They have not only raised awareness in Portland but have even forced the local government to reverse past mistakes.

Maybe it’s time to start something like that in all our cities here as well.