I never thought I’d actually like a software that has a full black screen with yellow text. Reminds me too much of the bad old DOS days. And yet, there’s something about Q10 that makes me want to use it more and more. Maybe it’s the simplicity, maybe there is less strain on my eyes. Either way, it’s a keeper. 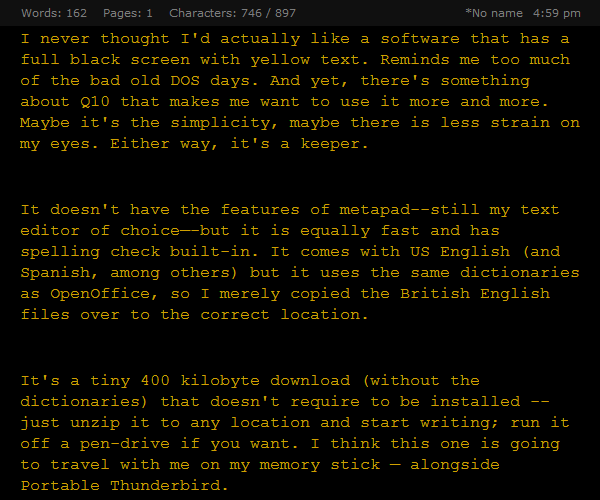 It doesn’t have the features of metapad – still my text editor of choice – but it is equally fast and has spelling check built-in. It comes with US English (and Spanish, among others) but since it uses the same dictionaries as OpenOffice, so I merely copied the British English files over to the correct location. And I also found a dozen or more spelling errors on this site…

It’s a tiny 400 kilobyte download (without the dictionaries) that doesn’t require to be installed – just unzip it to any location and start writing; run it off a pen-drive if you want. I think this one is going to travel with me on my cellphone; alongside Portable Thunderbird.

It’s semi-crashed on me a couple of times during spell-check – usually after it has encountered an apostrophe.