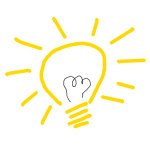 For the MChi interior site in Bombay (Mumbai), I found some really nice LED light fittings but they are more than three times the cost of identical CFL fittings. Now we all know that LEDs consume very little electricity  and they have an extremely long life but I wanted hard numbers to convince my clients – after all, they are the ones paying for everything.

It didn’t take long… At the light shop, it was pretty obvious that the 18W LED fitting threw as much light as an identical one housing 36W of CFLs.  Frankly I was a little surprised by the 1:2 power consumption ratio because I always assumed it was more like 2:3. However, LED technology is making such rapid strides that yesterday’s facts are already redundant. Putting all the costs into a spreadsheet immediately produced a very compelling argument in favour of the former. 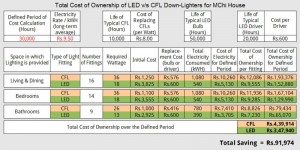 An Example of Total Cost of Ownership – LED v/s CFL

While the life of an LED bulb is in the region of 50,000 hours, the calculation over such a long period (while in favour of LEDs) is rather unfair because even at 5 hours per day, that means 27 years.  Instead, I’m working with 30,000 hours which represents a more realistic 16 years.

Even accounting for the fact that the LED driver (an electronic device that regulates the power that LEDs receive) doesn’t have a 50,000 hour life, the calculation still showed a huge saving.

The calculations here are not likely to remain valid for long because the cost of power is sure to rise even further and that of LEDs can only go downwards.